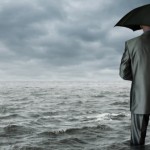 Our world is massively leveraged. This is not only in total dollars, yen, yuan, or euros; but also in percentage of debt to income, tax revenue, and gross domestic product (GDP). I’m personally not a huge fan of massive financial leverage, but the point of this article isn’t to disparage central bankers around the world. The point is to understand the realities of the investment world that we are all operating in and attempt to prepare ourselves to prosper.

The key thing to understand about leverage is that it breeds volatility, both good and bad.

Let’s take a simple example of buying a home. Assume, for this example, that the cost of the average home in the United States is $100. A classic mortgage would have the home buyer putting down 20%, or $20, to purchase the home with the bank financing the other 80%, or $80. In this example, you have four times as much leverage as you do equity, but historically, home prices have gone up (or at least been less volatile) than many stocks or other investments.

In a scenario where prices went down 15%, the homeowner would still have some equity ($5). However, many people have taken out loans where they put down only 3% to 4%. This does a couple of things: first, it pumps returns when prices go up, but second, it deepens losses when prices go down. Let’s compare a homeowner who puts down 20% and one who puts down 3%.

If prices go up 10%, then things play out like below:

In this scenario, you would be insane not to put down 3% on about 6 or 7 homes and make 6 or 7 times the money! The problem is that things don’t always go up, and leverage can have the opposite effect.

Related: If An Economy Crashed In The Woods And No One Cared, Would It Make A Sound?

Here is the scenario if prices go down only 5% from the initial $100 value:

Still has $15 of equity in their home

Underwater on their mortgage by $2

Some people might scoff at being underwater by $2 and say that it was worth the risk of making $10. However, keep in mind that by making leverage (3% down mortgages) available, there are now way more owners in the market with that leverage. What can happen is that people get nervous and start to sell en masse, which creates a spiral effect that is only enhanced by the increased leverage. The results from the massive leverage are the increasing volatile swings in values of hard assets.

To put what is happening (again) to the single-family market in context, in 2008 I purchased a stock fund that was an ultra-short stock that was essentially leveraged 50%. I received a letter in the mail from the SEC telling me that investing in this stock was risky because of the large amount of leverage associated with it. I found that somewhat ironic since the stock was shorting real estate mortgages that were leveraged 97%.

Prices are going up right now, and they may continue for quite a while. The Fed is dumping cash from helicopters (read: leverage), and that is a hard train to stop. But it will stop. The argument I hear from many people is that when prices go up, many people increase the equity in their home. Yes, this certainly happens. But there are still a lot of people who are buying the inflated prices with 20% or even 3% down. These people will be in trouble when the market corrects itself.

Even, and maybe in particular, the US government is overleveraging itself. The US government has about a $480 billion federal budget deficit and a national debt over $18 trillion. Federal tax revenue is only about $3 trillion. I’m not making the point that this is right or wrong, good or bad. The point is to understand that our world is massively, and increasingly, leveraged. At some point the market will go down, and in a drastic way because of all the leverage.

Here are five ways to protect yourself as you invest in this maniacally turbulent investment world.

5 Ways to Protect Yourself in a Leveraged Environment
1. Buy properties that have average rents below the median for the area.

I have always been a fan of this strategy. Maybe it was because my real estate career was born in the flames of the Great Recession, where during my senior year of college, in Fall of 2008, I saw 80% of the people working in my real estate office let go. Just as I was about to enter the real world, I saw dozens of high powered commercial real estate brokers who made hundreds of thousands of dollars per year lose just about everything — and quickly.

The question I ask myself is simple: can a family pay rent for my units if they lose their job and need to work for an hourly wage? The goal of this is to limit downside during a negative swing. If you can keep your units in good condition and at a reasonable price point, then you should always be pretty close to full. The same thing goes for buying single-family rentals.

The other benefit of having your rent below the median for the area is that there are necessarily more potential tenants who can afford your units. If you buy the million dollar single-family home with the hopes of renting it to some rich person for $10,000 a month, you may be waiting for a while. It is also more likely that a person who can afford $10,000 of rent will be able to buy a …read more

6 Reasons Landlords Should Thank Their Tenants This Holiday Season