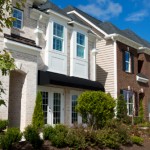 The primary function of a human brain is to learn. The progress — and indeed survival — of the human race depends on it. In spite of us real estate investors not exactly being the best and the brightest of what humanity has to offer, we too are hopefully capable of learning. Well, most of us anyhow…

Today, I am going to tell you a story of how I’ve succeeded in one battle, but having done so learned that if I continue fighting in this manner, I will undoubtedly end up losing the war. They call it falling forward, and I am particularly good at that.

This is a story of one of my acquisitions. Those of you who have been following me for a couple of years must remember an article I wrote some time ago titled “How I Bought a 10-unit with 1.5% Down – A Case Study,” in which I described the circumstances behind my purchase of a 10-unit building in 2013. Please read the article for full details.

Here is a brief synopsis:

Symphony is two 5-units sitting next to one another. It’s in a subdivision, which lies in one of the two most desirable school districts in my town. The subdivision is not too old, having been constructed in the ’80’s. Ninety-nine percent of all dwellings in this subdivision are SFRs, with only a few other apartments in a duplex/triplex configuration.

The buildings themselves are 1980’s vintage. The units are all quite large 2-story townhomes. Four units out of ten are 2-bed/1.5-bath, and the rest are 2/1. The units are all-electric and are sub-metered. The water service is sub-metered to each unit as well. The sewer and garbage are billed to the owner.

Related: How to Buy a Small MultiFamily Property: A Step by Step Case Study

The condition of the buildings at the time of purchase was just OK; there were no crumbling basement walls, no broken windows, no 2-foot holes in the wall. I thought that there was about $15,000 – $20,000 of delayed CapEx in total, and my plan was to resolve all of it over the first couple of years by basically re-investing the cash flow. All of the units were full and leased-up on 12-month leases.

My financing package included an institutional portfolio note for 70% of the purchase price, as well as a private note for 25% of the purchase price collateralized with a blanket. This left me having to come up with 5% — the commercial lender insisted that I have some skin in the game on this one even though they knew that it’d be nothing for me to finance 100% same as I always do. I agreed, mostly because having done the math, it became clear that after all of the pro-rations and credits, I needed only about $5,000 out-of-pocket to close.

What About Cash Flow…?!

The cash flow, according to my “very conservative” underwriting, was to be about $1,000/month ($100/door) with my financing package in place. However, the reason I bought the building was because I saw some ways by which I thought I could push that number up to $1,250 – $1,500/door/annum – that was the plan…

I bought Symphony in February of 2013, and as such, I had owned it for 11 months in that calendar year.

Question: How well do you think I did?

Answer: When I did my taxes that year, it became painfully clear that although I hadn’t lost money, I might as well have. Indeed, $3,000 was all I cleared on Symphony in 2013. I spent over $15,000 on CapEx right out of the gate. I encountered more evictions than I anticipated or had underwritten, which came with many more months without rents coming in than I’d thought would have been possible.

As it turned out, I wasn’t merely re-investing cash flow that year at all; indeed, I was borrowing from myself, and then slowly getting paid back, and while the building did pay me back in that first year, I never want to be on that roller-coaster again… extrapolate that!

In the middle of all of this, I remember doubting myself and my decision-making process as it relates to underwriting and real estate in general. I remember telling Patrisha, Why do I even bother…?! Granted, any time we buy a destabilized asset, there is an expected period of hard work and financial strain. But once this heavy lifting is done and the asset is stable, which in my previous experience had always been 3-4 months, the cash flow becomes much more stable, predicable, and passive. Eleven months into this deal, I was starting to wonder whether Symphony was going to ever turn the corner into behaving as a stabilized asset.

Following last year’s fiasco, I put in place some rather rigorous tracking. I hadn’t realized how poorly the building had performed until my CPAs prepared our taxes. There was a lot of money flowing in and out on a monthly basis, and it “seemed” like I was doing better than that. I knew that I was working hard and invested a lot of my floats into the rehab, but I had no idea until very late in the game that year exactly how poorly I had managed this process.

This was not only unacceptable, but it was stupid! After all, we buy real estate in lieu of other investment vehicles specifically because it puts us in control and allows us to respond quickly to the realities on the ground. I completely missed the boat on that, and it was time to change my systems!

Nowadays, in the beginning of each month I check …read more