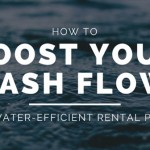 Of all the rental properties I’ve ever owned, there is one utility bill I’ve always gotten stuck paying out-of-pocket.

A lot of multi-family landlords have to deal with this issue. It’s one of those ever-present utilities that is always needed, no matter who you’re tenants are, what time of year it is or what region of the country you’re in.

In my town, it’s a bit of a hassle to transfer the water bill from one tenant to another, so even though the extra cost is mildly annoying, its usage is consistent enough (without any major spikes from month to month) that I can factor it into the price of rent fairly easily.

Last year, the cost of water at one of my duplexes was approximately $800 for both units combined (I should mention that all of my properties are Michigan, where fresh water is abundant and the price of it is about the cheapest in the nation). It wasn’t the end of the world, but I certainly would’ve been okay with that bill going down to, say, $400 – $500 or lower.

It got me thinking — what if I could save a few hundred bucks on all of my rental properties each year? Would it make sense for me to invest in some new, water-efficient plumbing fixtures at this property?

If I was able to justify this kind of investment in Michigan, it would certainly make even more sense to do it in places like Atlanta, Seattle or Santa Fe, where the cost of water is three to six times more expensive than it is in my hometown. For landlords in these more expensive markets, savings could be more like $900 – $1,800 per year for a similar duplex, maybe even more!

According to circleofblue.org, the cost of water has gone up 33% in 30 major U.S. cities since 2010, which means we can probably safely assume it will only continue to increase in future years (click the chart below to enlarge).

With this in mind, I wanted to find out how much it would cost to install some new fixtures with higher water efficiency and how long it would take for this increased efficiency to actually pay for itself and start adding a real contribution to my bottom line each year.

A Look at the Numbers

All of my rental properties were built about 100 years ago. Each unit is in decent shape, but the toilets, faucets and shower heads are all showing their age.

While it’s difficult to say how old each individual fixture is, they’re clearly dated from an era prior to 1992, which allows me to draw a few conclusions:

According to the EPA website, the U.S. government set a number of water consumption standards throughout the 1990s that set new limitations on the flow rate of faucets to 2.2 gallons per minute, toilets to 1.6 gallons per flush and shower heads to 2.5 gallons per minute. In short, today’s plumbing fixtures have become WAY more efficient than they’ve ever been before.

After a bit of shopping and a few months of trying them out in my own house, I was able to find some solid choices to act as replacement fixtures in each of my rental units. There were a few basic criteria I used to decide which ones I would end up installing in my rental properties. They were as follows:

2. The cost of each fixture must be reasonable.

As I was shopping around, I found that some plumbing fixtures can get really expensive, making it very difficult to justify this kind of “improvement” to a rental property. In order for this cost to make sense, these plumbing fixtures needed to be justifiable as an investment with a real, positive end result in the form of cost savings. If a faucet, toilet or shower head is so expensive that it takes 15 years to pay off, it’s not going to work.

3. The fixtures need to be highly rated, well-built and able to take a beating.

Make no mistake about it, these fixtures are going into rental properties; they aren’t always going to be treated with “tender loving care.” I’d be remiss if I wasn’t planning for these things to take a real beating over the next couple of decades. As such, each of these fixtures had to be built to last for several years without needing replacement.

Related: When Going “Green” Counts: 7 Ways to Save Money on Your Rentals Through Water Conservation

The Fixtures I Chose (and the Results)
Delta Foundations Single Handle Kitchen Faucet, 1.8 Gallons Per Minute

Coming in at less than $60, with a 4.5 star rating on Amazon and a flow rate of 1.8 gallons per minute, this faucet was an easy choice. I actually bought this faucet for my first house back in 2006. We used it there for over 3 years and not only did it look great, but it works flawlessly.

It’s a well-built faucet that seems to be made mostly of metal (which makes the price surprisingly low). I was also pleased to find that the 1.8 gpm water flow didn’t seem to cause any annoyances …read more